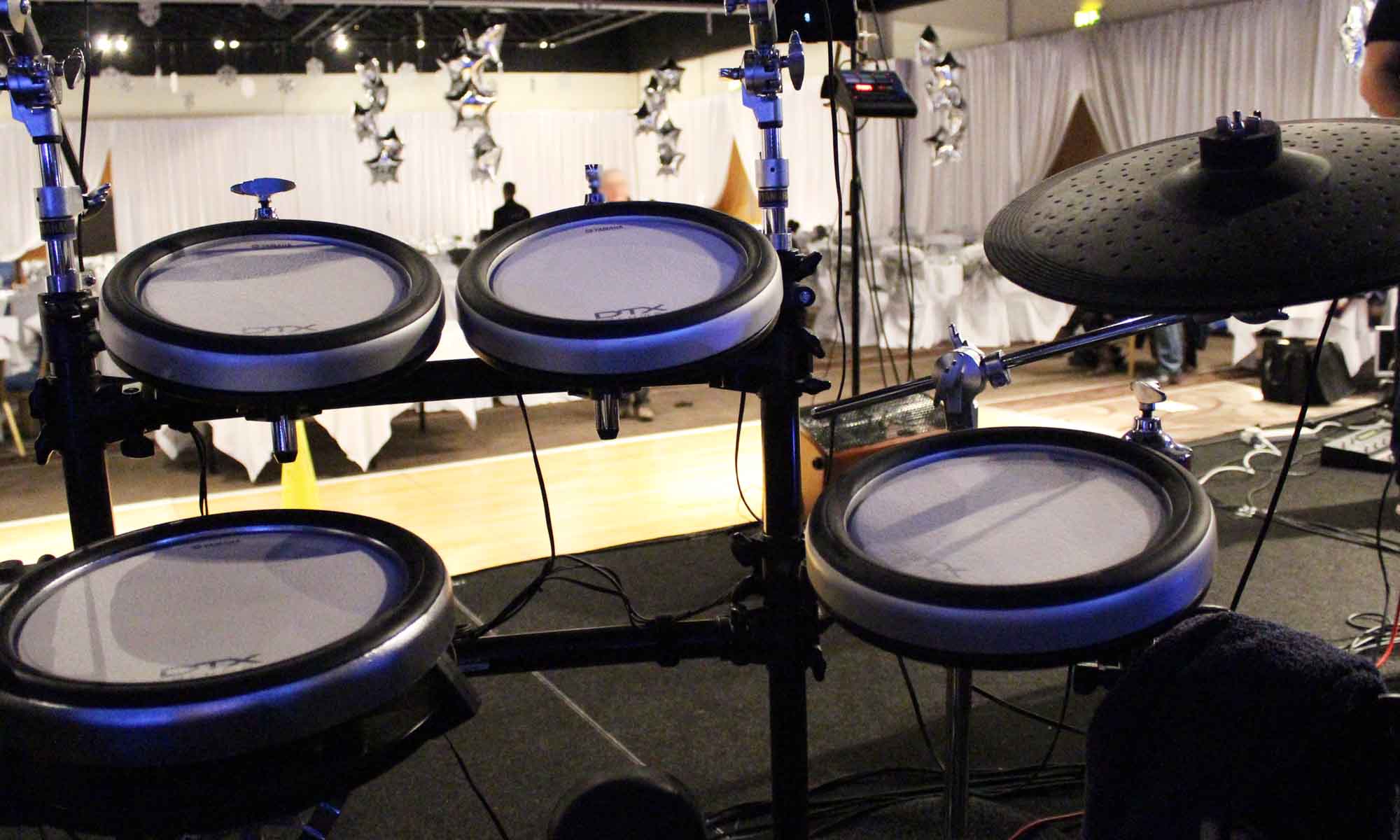 In the last article about gigging an e-kit we talked about getting the kit gig-ready – sorting the sounds and configuring the module. Well a LOT has happened since then. I gigged my trusty Yamaha DTX-750K for about 1 year in a range of venues from smalls pubs to clubs and large function spaces. I’ll cut to the chase – it was a nightmare!

OK, I exaggerate slightly – it wasn’t that bad… but I couldn’t take any more than a year of it. It was sufficiently bad that I quit the band and returned to gigging my acoustic kit in a new band. In this article I’ll explain why. Before I go into what went wrong and why I’ll never gig an e-kit again (I say that now… show me the money!) here are some tips that might help you if you’re just starting out as a gigging e-kit drummer.

Sticky Dots Are Your Friend

In dark venues when you’re in a rush to set up it makes life a lot easier to have an easy-to-see sticky dot on key connectors so it’s obvious what goes where. I even went as far as having Left and Right crash cymbal dots (bLue dot for left, Red dot for right). It all helps for faster set-up and avoids accidently getting your hi-hat cables the wrong way ’round!

Drum Mats Are Your Friend

Invest in a decent drum mat. The Protection Racket mats work great with the velcro on the bottom of the kick pad and I had no issues with pad silippage. You don’t need a huge mat but get one big enough so that your stool and kick pad all sit on the same mat. That way your body weight will stop the mat from moving.

Fluffy padded snare drum bags are great for transporting e-kit cymbals. A laptop bag worked well for transporting the module. The bulk of the kit could be (carefully) moved in one folded-up piece once the cymbals were removed.

Snagging Wires Are NOT Your Friend

Make sure there’s PLENTY play on all your connection wires so they don’t get snagged / strained either during playing or while folding the rack frame up. This is really important as if cables are being strained ANYWHERE they’re much more likely to fail.

I’m not a naive chap – or at least I don’t think I am. I knew what I was letting myself in for as soon as I agreed to ditch my trusty Pearl and commit to becoming an e-kit drummer. I knew it wouldn’t have the volume of an acoustic kit. I knew I’d be plagued by sound propagation and monitoring issues. I knew it wouldn’t feel like a real kit or sound like a real kit (and the 750K is a REALLY GOOD e-kit!). To be fair the first few months were a lot of fun. It was a relief to play in some smaller venues that would normally suffer from the volume of a real kit – I could just turn my drums down, how awesome is that! And the flexibility I had in terms of kit sounds meant we could get almost our entire 80’s set sounding pretty much exactly like the original recordings. Between me, a great bass player and our accomplished keyboard player who was a whiz with the old vocoder and sampler, we had it nailed and it was a lot of fun (don’t talk to me about singers… that’s another story!). The kit was connected directly to two channels of the mixing desk so I had a nice stereo mix (mono monitor mix) through a decent size PA system.

One of the first issues I ran into was caused by the pesky speed of sound. I knew this was going to be a potential issue but I had no idea how much of a problem this could cause. In any venue bigger than a pub there was a noticable time delay between hitting a drum and hearing the sound from the PA speakers. As I was listening a complete mix of the band through the monitor my drums were often lost in the mix. Front of house they sounded fine but I’m used to hearing my kit… and a bit of the band – not the band… and a bit of my kit. Through a single mono monitor they were lost and at the time I had no way of having a separate monitor mix just for drums. I don’t know if you’ve ever tried playing the drums while having your head in a different room – that’s what it was like. Hearing the sound coming from 20ft away… with a slight delay. It REALLY messes with your head.

With speakers just 10m away you’re looking at around 30ms delay – that doesn’t sound like a lot but trust me it’s noticeable as a drummer! The delay can play havoc with your timing making it almost impossible to play at a steady tempo. The problem was eventually resolved by feeding the Headphone Out from the module directly into an aux-in on the monitor – so I could boost the level of the drums ONLY in my monitor and have complete control of it from behind my kit. One cable made a world of difference!

The next issue we ran into was a generally weak drum sound. The drum sounds on the DTX700 module are excellent – some of the best e-kit sounds I’ve ever heard. They sound great through headphones. They sound great through speakers. But in a live mix they just sounded… weak. I *think* this was caused by the sounds being quite heavy on the bottom end – lots of low inaudible frequencies. I’m not sure – we never really got to the bottom of it. We couldn’t make the drums any louder – they were already peaking and pushing the PA to the limits. The problem was partly resolved by putting a Low Cut on the master eq. from the module to knock out a lot of the really low frequencies… but then we lost a lot of the really low frequencies and it didn’t have that ‘being punched in the stomach’ sound it had before. Eventually we invested in some outboard dynamics (compression, eq. and the like) – this helped a bit but I still found myself having to tweak individual drum sounds to suit the venue – it was a bit of a chew on.

After about 6 months of gigging the kit it was starting to get some abuse. Lugging it in and out of the house, in and out of my truck in the rain and in and out of venues was taking its toll on various components. Amazingly nothing broke and it stood up well to a regular battering but paranoia really started to kick in. E-kits just aren’t built like acoustic kits – many parts of the rack frame are made of plastic.

The cables that connect the pads up are thin and flimsy. The pads themselves are largely plastic. In a stationary environment this is absolutely fine but it’s just not designed to be moved around on a regular basis. And then of course there’s the module – without the module the drums are completely non-functional and a ‘spare’ module would cost £700+ ($1,000). The power cable to the module is one step up from bell-wire and if that goes… bye bye drums. Sure, I could have a backup PSU… backup parts for the rack frame… backup pads… but a single XP80 tom pad is £185 ($270) – I could buy a reasonable acoustic kit for that! And there’s no way on earth I was spending £700+ on a backup module! Think of the extra cymbals I could buy for £700!?! 🙂 So the only option really was to live with the fact that at any moment something could break and I’d be drumless… mid set. I really didn’t like that feeling.

This could be a ‘just me’ issue rather than a general ‘electronic drum kit issue’ but I’ve heard other people talk about this too. One of the knock-on effects of playing a ‘quiet’ drum kit is that you hit the things harder! Of course ‘in the mix’ the kit sounded generally fine BUT from the drummer’s perspective, even with ear-piercingly loud monitors, the kit was nowhere near as loud as acoustic drums. Part of the problem here was down to having a single monitor pointing ‘up’ at my left ear from the floor. The overall result was me playing VERY hard for the entire gig in a futile attempt to get more volume out my drums. Completely psychological but a very real problem when the sound isn’t coming from the things you hit. Perhaps with a bigger, more stereoy monitor stack this would have been less of an issue but alas I wasn’t playing Wembley – I was playing in a pub or club and as such I’d come off stage significantly more fatigued than when I’d been playing the acoustic kit for the same amount of time… but strangely less satistifed.

In the end I found the e-kit just wasn’t a pleasurable thing to play live. Perhaps if I’d gone straight into e-kit playing without having gigged an acoustic kit for 20+ years it would have been a different story. But I missed my real kit so much I just had to call it a day. Don’t get me wrong – the e-kit is a FANTASTIC practice and teaching tool – I use it every day for that and if you take it away from me I’ll hunt you down. But please don’t make me play it at a gig ever again! I’m not saying don’t gig an electronic drum kit – plenty drummers play e-kits in VERY large venues on a regular basis and things work out just fine. I’m just saying it wasn’t for me.

I’m back behind my real kit for gigs and have added a hybrid set-up with an Alesis SamplePad Pro. This gives me all the flexibility I need in terms of sounds and when I hit a drum I don’t have to wait around to hear it. There’s no place like home! See you next time!